My first time to Toyota Speedway at Irwindale aka the “House of Drift”, and was it crazy! It was one of the biggest drift events I’ve been ever been to, the grandstands were packed with thousands of drift crazy fans.

The drivers performed quite a show, pulling out all the stops as the championship title was coming down to the wire. They pushed their skills, and cars to the limit, and it shows by the amount of cars claimed by the walls of Irwindale. There was so much drama, it was like watching a soap opera, you didn’t know what to expect. The championship came down to the last few races to determine a winner. When the smoke settled, Daijiro Yoshihara and his Discount Tires S13 was 2011 Formula Drift Champion, his first. Dai’s been around forever as far as professional drifting in American is concerned. He is one of my favorite drifters, and its good to finally see him win! Well Deserved!

Tyler McQuarrie and his Falken 350z took first place at the house of drift. Which I believe was his first event win in Formula Drift. Tyler being from Northern California automatically makes me a fan of his! I love his style of drifting, always laying on the throttle letting that v8 sing and going 110% every time. He shreds Falken’s like nobody else. His nickname is “The Rock” but I’m calling him “Smoke” from now on.

Slammed Society by Fatlace also but on a small carshow in the back of the paddock. Which was cool seeing alot of different cars I don’t usually see. Love it or hate it, low offset wheels, “hella flush” , and stance are here to stay. To me I still loved the days when making your car fast was the thing to do. Now its about looking fast, and slammed.. so be it. Zero engine and performance mods, but Bling bling low-offset rims + spacer’s, and a slam and call it a day. No, I’m not hating, I just miss the old days. Some cars are tastefully done though, and credit is due where it’s earned.

Like I said this was one of the biggest and badass drift events I’ve been to, I really hope this is the future of drifting. I had a total blast and I’m ready for the 2012 season to start! *cough* COME BACK TO SONOMA! *cough*. One thing I love about Formula Drift, is the interaction with drivers and the fans. They are all very approachable, and don’t mind talking and interacting wit the fans. Chris Forsberg, and Ryan Tuerck were sitting next to us watching the action on the track and inhaling tire smoke. They are just normal car guys like all of us in the end.Again congrats to Dai! Can’t wait for next season!

*note all my pics where taken from the grandstands, I was on vacation to watch drifting. hahaha! 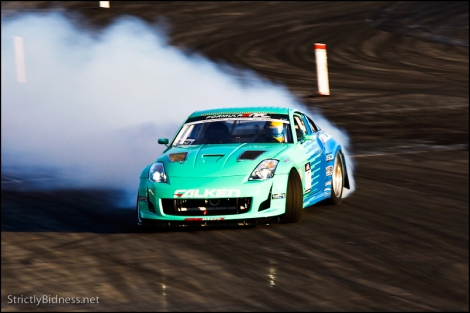